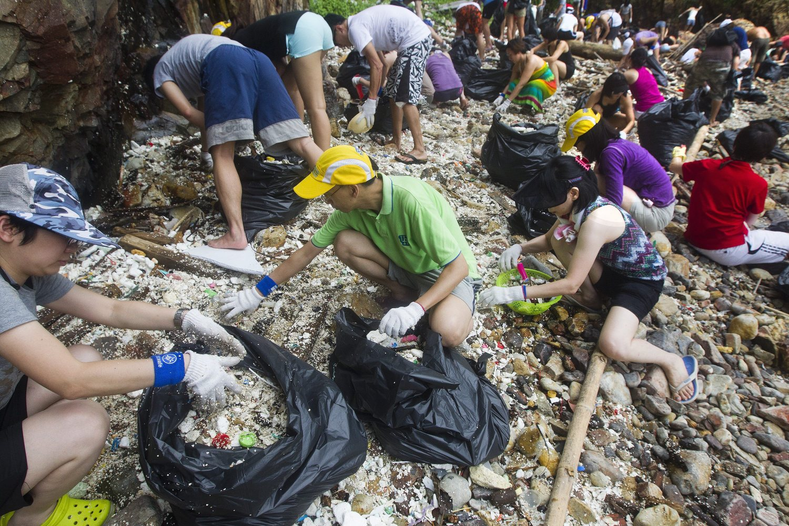 It may be true that the world is drowned in plastics, however, in last few weeks, it seems to be submerged more in statistics than in plastics. Read, for example, One million plastic drinking bottles are purchased every minute, 5 trillion single-use plastic bags are used worldwide every year, the world has produced till this date about 8.3 billion tonnes of plastics, that is more than one tonne per person today.

It may be true that the world is drowned in plastics, however, in last few weeks, it seems to be submerged more in statistics than in plastics. Read for example: One million plastic drinking bottles are purchased every minute, 5 trillion single-use plastic bags are used worldwide every year, half of all plastic produced is designed to be used only once and then thrown away, world has produced till this date about 8.3 billion tonnes of plastics, that is more than one tonne per person today. Out of global plastic production of 380 million tonnes in 2016, an equivalent of the total weight of the human population, only about 10 per cent is recycled and another 12 per cent incinerated.

Nearer our home, in India, more than 5 to 7 million tonnes of the plastic waste is generated every year of which 40 per cent remains uncollected and littered. Eventually, it enters rivers and oceans and then in the food chain. The balance is mostly sent to landfill or burned.

UN report gives a shocking prediction that by 2050 there will be more plastic in the ocean than the fish.

What is our response?

Get armed with gloves, bags and put on military shoes. Get into half sleeved shirts and then with battalions of men, women, children and start picking up the littered plastics from streets, beaches, parks, forests and river banks. Indeed, when such armies are led by the national and international leaders in ‘great global plastic pick-up’, the dedication is obvious. Many critics, however, say that it is ‘end-of-the-pipe’ solution that overshadows the root problem and does not allow us to see the forest for the trees. It is like keeping cleaning the rivers without preventing the untreated waste streams flowing into them.

Should not we, therefore, prevent the unnecessary production and consumption of plastics that results in the waste generation? Is it not futile to keep collecting waste with armies of citizens, that too without any clue of how to dispose of the collected littered plastic?

When the world solved the life-threatening challenge of ozone layer depletion, caused by man-made ozone-depleting chemicals like CFCs, we did not keep on capturing CFCs. We stopped their production and consumption. We developed effective alternatives to CFCs over the years.  CFCs were recycled till alternatives were found. The producing industries were given strict targets to get alternatives and close down production of ozone-depleting chemicals. Developed countries helped developing countries like India and China. Ozone layer protection was an excellent example of how Sustainable Development Goals of responsible production and consumption -Goal number 12- and partnerships -goal 17.

World Environment Day, a flagship campaign of the United Nations Environment Programme (UNEP) has a theme and a host country each year. Indeed it creates global awareness among the top-most policy makers as well as all stakeholders on the environmental issues.

2018, was the watershed year because UNEP’s chief Erik Solheim drew attention on the menace of plastic waste. He  criss-crossed the host country, India, and even joined the army of the citizens in cleaning the beaches.

A blog on UNEP’s web site , interestingly,  states the critics’ point of view that ‘cleaning a beach is not turning the tide, because the tide will just come in again, depositing more plastic cups, bottles, straws, bags and discarded fishing equipment’.

Indeed, clean-up campaigns, like that on Versova  beach in Mumbai , do make a difference. Every piece of trash that is collected and taken away means one less life threatening  item for birds, turtles or whales to swallow. Clean-ups also inspire and educate masses to take action for responsible consumption.

But what is needed is to address the challenge at its source. CEOs of the manufacturers of plastics, products and its designers must join the ‘everlasting clean-up’ by reducing unnecessary plastic at source, design less harmful plastics  and develop the best recycling processes.  Extended liability for the protection of the environment lies with the producers as well as consumers.END.

Well said sir, the imperative now is to stop production and usage of plastics. I remember the absence of plastics in packaging in my youth, and I am not even 40. Biscuits, milk, chips, toffees, a whole load of consumables – everything comes wrapped in plastics, many layers of it. And often for no discernible reason at all. If glass bottles for cola, milk or water worked before – why not now?! We have just taught people to be lazy and careless. I believe even punitive charging for plastic packaged items may fail – we’ve become that callous about resources.

It is time plastics are banned for consumables and single use items. We can do without consuming cola, chips and sundry other fast-food poisons for the time being – unless we find a better way to distribute and package these.

Salty but Sweet, Arid but Awakening, Sandy but Stimulating May 17, 2018