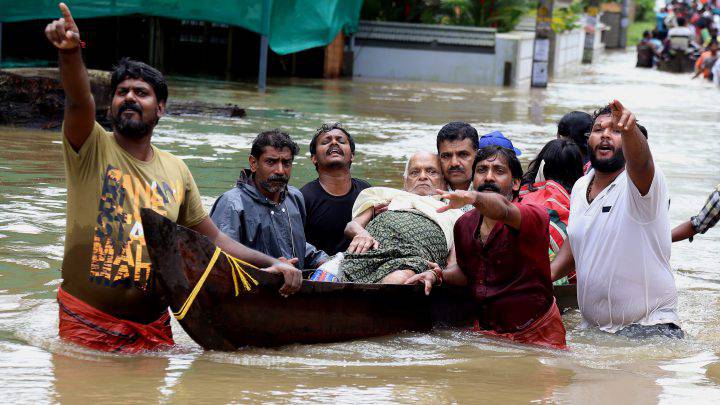 20 years back ,in August 1998, the then Prime Mister of China Zhu Rongji known for his aggressive administration methods and penchant for sweeping policy reforms, proposed in the meeting of China’s State Council

20 years back ,in August 1998, the then Prime Mister of China Zhu Rongji known for his aggressive administration methods and penchant for sweeping policy reforms, proposed in the meeting of China’s State Council, a total ban on logging in the forest-slopes of Sichuan province. It was in response to the devastating flood-crisis  that China was facing in the Yangtze river basin.

That policy was in-acted overnight, while the floods in Yangtze river were still at the peak and rescue operations were in full swing. It was just one year after the Kyoto Protocol on Climate Change. But still Zhu was in no mood to analyse if that extreme event was due to climate change.

No doubt that the immediate reason for devastating 1998 floods in China , worst in 44 years, with more than 3700 dead and 15 million homeless, was the severe rainfall during short period of time. Indeed, UN Office for the Coordination of Humanitarian Affairs that was requested to make the report within a month, also acknowledged the exceptional rainfall which it ascribed to worldwide El Niño. But Zhu vehemently argued that the it is more important to look at the darker side of disaster rather than source of the disaster i.e. rampant logging and deforestation, causing serious soil erosion. He cited that similar devastation had occurred due to Yangtze floods in recent memory 1870, 1931 and 1954 when climate change was not around. Zhu declared severe punishments for logging in the same meeting and incentivized afforestation with ambitious targets by 2000 and 2010.

Same month, but now 2018, India is facing the devastation in Kerala,worst ever since 1924. With nearly 400 dead and a million homeless, the questions are gushing like the water from the flood gates of its dams. Is it natural disaster or man-made? Is it climatic event or due to global warming?

It is easy and convenient to link the causative chain to climate change. Indeed, the global warming has led to the rise in sea-level and atmosphere temperature (nearly 1 degree Celsius over the pre-industrial times). This has resulted in the increased frequency and intensity of the extreme weather events over last six decades.

There’s a well-established physics law, the Clausius-Clapeyron equation, studied by most of the high-school and college students, that says that a hotter atmosphere holds more moisture. For every extra degree Celsius in warming, the atmosphere can hold 7% more water.The increased evaporation due to warming is carried by atmosphere in the form of moisture. That comes down as increased rain.

To this extent global warming is indeed responsible for higher rainfall. But that does not explain ‘extreme’ and ‘localized’ rainfall.The simple reason is that atmospheric physics is not only ‘cloudy’ in literal sense but also ‘chaotic’ in its real sense. Modelling tounderstand the weather patterns and climate variability are getting better but not yet well mastered and perfected. Occurrence of El Nino and La Nina make such exercises even more frustrating.

Intergovernmental Panel on Climate Change (IPCC), the United Nations body constituted by United Nations Environment Programme (UNEP) and World Meteorological Organization (WMO) produce regular reports on climate change by distilling out and by peer- reviewing global research and observations on climate change. It has been very categorical in stating that no extreme weather event like long spell of heavy downpour can be linked on one-to-one basis to climate change. Nor the scientists are in position to predict such events with certainty. IPCC’s firth assessment report released in 2014 (next report is due in 2021) has, however, indicated with ‘very high confidence’ that the regional key risks due to flooding in Asia in this century is ‘very high’.

Blaming each of such weather disaster to the climate change has in reality become a way for the authorities to absolve themselves from their essential responsibilities of preventing the consequential colossal damage to the life, infrastructure and ecosystems. Unprecedented rainfall could not have been prevented, whether it is due to global warming or not, but the resulting catastrophe could have.

Indiscriminate logging in Kerala has reduced the forest cover 1920 to 1990 by 40 percent according to the report of Western Ghats Ecology Expert Panel. Nearly 1 million hectares of the forest land is lost between 1973 to 2016 as per Indian Institute of Science report. That reduced the soil’s capacity to hold the mud-slides. Illegal mining, including that of sands that ‘bank’ the flood waters, is rampant in Kerala. Over-enthusiastic water-tourism has allowed the infrastructure and habitat to be vulnerably exposed to the flood-waters. The uncoordinated dam-water management has left the communities and the wild-life to find their own ways to save their lives.

Is there way out?

There are numerous examples and initiatives to learn from and to participate in. Global Precipitation Measurement (GPM) mission of NASA and Japan Aerospace Agency had predicted Kerala floods just about few days in advance. But collaboration with GPM and initiating disaster management ‘just-in-time’ could still have helped.

Switzerland (about same size as Kerala) has 200 major dams as against 61 of Kerala. Switzerland’s designated central authority coordinates the safety and flood gates operation. Collaborating with Switzerland on such dam-management and inundation-mapping would prepare India in future. In Kerala, dam safety analysis had not been done for any of the state&#39;s 61 dams.

China has now acquired huge experience in disaster and flood management-five most deadly floods in human history were all in China. Cooperation with China would go long way in managing and containing the flood damages.

Innovation in global deals-not only for purchase of fighter planes but also-for fighting the disasters through preparedness and learning to strike-not only militarily but-also through Zhu-Rongji-style targeting of the illegal logging, mining and infrastructure would make India ‘climate-safe’.