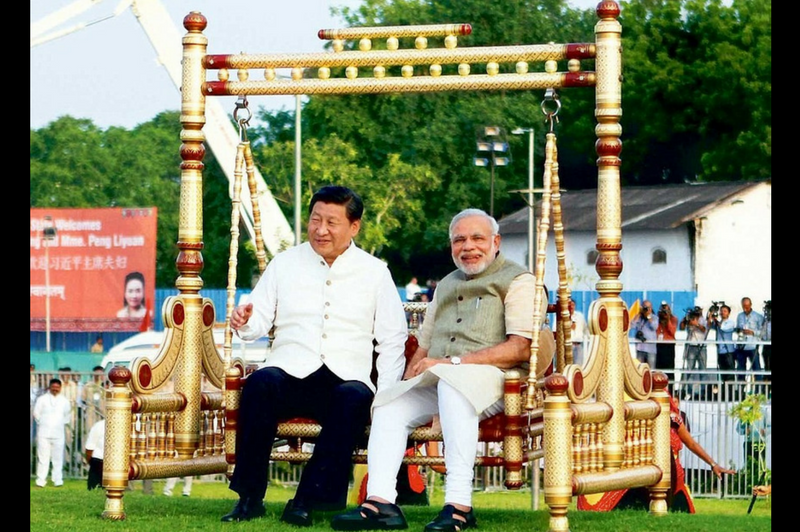 From Doklam Dispute to Wuhan Warmth is a dramatic shift. The literal meaning of Doklam is ‘rocky road’. ( written just before Modi-Xi informal summit in Wuhan )

26th April 2018: Whatever the conflicting realities on the ground, history has shown that both India and China have shared a dream of peaceful coexistence. That desire became stronger after the freedom of both the countries from foreign powers. This silk-road to peace has, in recent past,  often turned into rocky-road giving leaders of both countries a bumpy ride.

Wuhan is known as the city of bridges across rivers Yangtse and Han. There are clearly game-changing and long-term win-win opportunities for both India and China to build the bridges and to take collaborative initiative for global stewardship when PM Modi and President Xi meet in Wuhan.

The recent dispute at Doklam became  Himalayan hot-spot from June to August in 2017. Chinese population, more than Indian, strongly believed that Doklam face-off has brought China on the brink of a full-scale war with India. It was mainly driven by media campaign in China that took ugly turn into near racist-slings. Indian media was, as usual, more cacophonic than malicious.

In August 2017, both countries agreed to retreat. India, obviously a small brother in all respects, realised that it is clearly out-numbered, except for GDP growth ( !), which in any case would not help in the war. And big brother China, rightly considered strategic disaster for himself to make a mortal enemy out of India. The last thing President Xi wanted was an ageing, and economically less vibrant China to fall into a generations-long cold war with India.

The stone pelting stand-off between Indian and Chinese soldiers at 10,000 feet high Himalayan plateau thus ended. Now a plum-blossom ( Wuhan’s city symbol) start-up in the Sino-Indian diplomacy has taken off.

Territorial conflicts cannot be hedged against the control of trade. And initiatives like International Solar Alliance cannot be hedged against Belt Road Initiative -BRI( also called earlier as  One Belt one Road -OBOR). Having disengaged from Doklam plateau, China and India should now engage in availing the huge opportunities related to sustainable development for their peoples.

It is the historic opportunity for China and India, emerging giant economies,  to fill the global innovation gap, created by stagnant developed economies. Wuhan is the third largest education hub in China in science and technology with more than 35 institutes of high learning and 350 research institutes and numerous incubators. Hope Modi visits them and talks to youth there. People to people contacts between India and China would be the key to sustained mutual respect.

Not exploiting collaborative opportunities in science and technology tantamount to starkly denying the inclusive development of their own societies and overlooking the prospects of assuming global stewardship.

It is hoped that Modi-Xi visit goes beyond the trade rhetoric. There is need to deploy the language of the smart and digital future aimed at addressing the inequality, air-pollution, climate change, energy dependence, restless youth, fast urbanizing population, eroding the agricultural base and finally terrorism. The partnership between India and China would be essential in saving the time and cost in addressing these challenges particularly when the time is not on our side, for example in case of climate change, and costs are prohibitive in short term.

The personal chemistry between Modi and Xi is conducive for long term cooperation. Their visits to each other’s home states early on in 2014-15 had set the harmonious tones. Their mutual praise in July 2017, even when the Indian and Chinese battalions were facing each other on Doklam Plateau and Modi and Xi facing each other in Hamburg, Germany in margins of G-20 summit was simply amazing and went beyond the usual classical lessons in diplomacy. We now need similar out-of-box collaborative approaches to provide the future that youth of both countries want.

Fortunately, both countries have institutional framework to build the bridges. BRICS,  a consortium of five major emerging national economies: Brazil, Russia, India, China and South Africa is the prime arm of such mechanism. That represents  40 percent of world population and 25 % of world’s GDP  and limitless emerging opportunities.

But often overshadowed by the nationalistic trade ambitions and territorial conflicts are the two excellent initiatives of China, fully supported by India as the major shareholder. One is Asian Infrastructure Investment Bank (AIIB) based in Beijing. Second is New Development Bank (NDB)-based in Shanghai with the capital of USD 100 billion each. India and China can leverage green financing for joint projects. Many developed countries are anxious to see these initiatives fade away. It may as well be the case if two all these frameworks during their informal bilateral talks.

The foundation has also been laid for the energy-related cooperation between India and China since 2016, by holding a joint dialogue between the ministries of two countries. China and India account for 60 percent of incremental world energy demand at present. Coal-dominated and oil-dependent energy structure are the drivers of energy insecurity. Use of fossil fuel and inefficient use of biomass burning are responsible for air pollution that causes premature deaths of 5.5 million people in two countries together, as per World Health Organization. Reducing carbon emissions is, therefore, critical not only because of Paris Climate Agreement but also for the healthy and pollution-free life of their people. It is of interest to both countries to enhance energy efficiency and rapidly increase the share of renewable energy in its total energy mix and reduce the dependence on coal.

China has effectively demonstrated its extraordinary speed and scale in implementing it’s renewable energy target. It has become the first country in the world to achieve 100 GW of PV capacity in 2017. India is planning to reach 100 GW od target by 2022, and presently have reached about 13 GW. Clearly, the collaboration would be the key.

But it is not just trading, installed capacity, investment and growth rate. Innovations would hasten the transformation. Internet-of-Things along with. ‘Roofs-of-Everything’ like cars, houses, roads, trains, aircraft with solar tiles and nano-particle PV cells in flexible films and offshore windmills would bring the fourth industrial revolution very close.

India and China have moved away from assaulting each other with stones. Now it is time to build the bridges at Wuhan. The world is watching if two giants cooperate or compete.  END