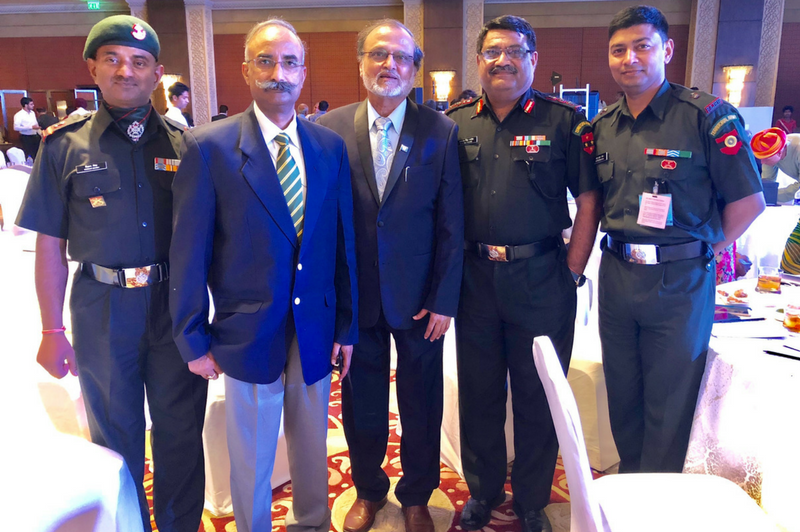 We all heard of heroic stories of Indian Army who protect our national borders. We are able to take quiet and undisturbed sleep only because of the soldiers that are awake to protect us. But have you heard of Indian army protecting our environment with the same spirit as they protect the national borders? Yes, they do it, so that our children and our Children’s
children would be able to sleep quietly. Here is the award winning story!

I salute the extraordinary efforts of 128 INF BN (Territorial Army) Eco Rajputana Rifles and congratulate them from bottom of my heart precisely for this reason. I was proud to be on the jury for the award.

They recently won the Earth Care Award, institutionalized by Times of India and JSW in New Delhi. The soldiers came to receive the award. They received it with great pride but with military discipline by saluting the Minister of Environment, Forest and Climate Change Dr. Harsha Vardhan.

The award to Eco Rajputana Rifles was for its exceptional drive for extensive and well-managed plantations, and efforts to combat desertification in India. The initiative resulted in stabilization of sand dunes along the Indira Gandhi Canal with a 90% survival rate of the
plantations, eco-restoration and contribution towards protection of threatened species.

Nearly 61% of Rajasthan falls under arid and semi-arid zone with scanty and erratic rainfall and high velocity winds. The predominant wind direction in Rajasthan is South West to North East, the tendency for desertification has been more in that direction. This is causing expansion of the Thar Desert in towards the east and northeast.

Like the military strategy to win the war, this Eco-unit developed a strategy for winning a war against the environmental degradation. Stabilization of sand dunes in the Thar Desert for preventing desertification and creating plantation strips and shelter belts perpendicular to the predominant wind direction in areas spread from Ramgarh to the foothills of Mount Abu was the key element of the strategy.

The war is not yet won. But battle is won by initiating the march. That&#39;s the thing about awards – it&#39;s for the people who do all the hard work behind the scenes. A plaque, a clap and pat on back is inadequate to appreciate their work. END

Congratulations for being the judge for such an award. There can be no better person for this very responsible task. A very big feather in your loaded cap. Proud to be your colleague and friend. All the very best