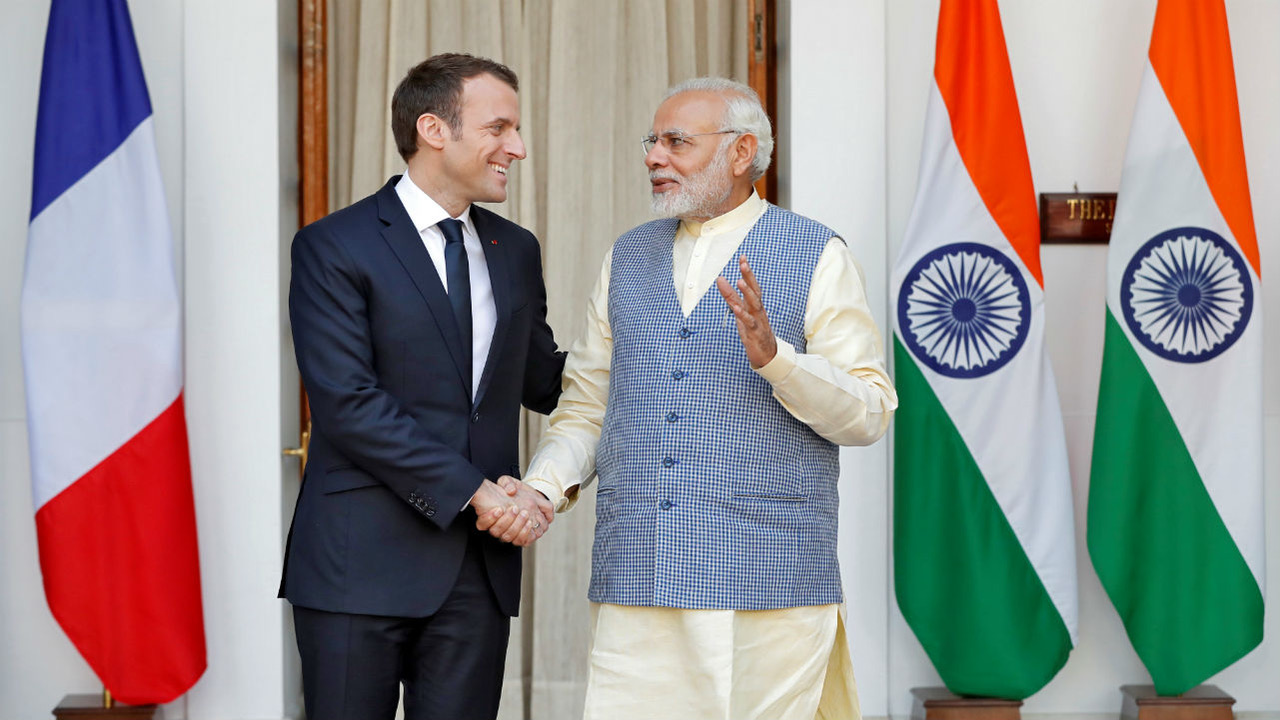 Narendra Modi, Prime Minister of India and Emmanuel Macron, President of France are declared as the “most outstanding environmental change-makers” by United Nations Environment.

Narendra Modi, Prime Minister of India and Emmanuel Macron, President of France are declared as the “most outstanding environmental changemakers” by United Nations Environment. Both of them are bestowed with the Champions of the Earth Award, the UN’s highest environmental honour.

Both Modi and Macron, the world’s most aggressive climate change saviors are recognized for their pioneering work in championing the International Solar Alliance and promotingnew areas of levels of cooperation on environmental action, including Macron’s work on the Global Pact for the Environment and Modi’s unprecedented pledge to eliminate all single-use plastic in India by 2022.

The present status of the environmental degradation likeclimate change, waste generation, loss of biodiversity and water crisis need require combination of bold, innovative, andtireless efforts to tackle some of the most urgent environmental issues of our times.

Two leaders had rendezvous in March in New Delhi, where they demonstrated that bold and innovative leadership.

Many still doubt the final outcome of their efforts but as of today, amidst shaky, uncertain and backtracking tendencies at the heads of the state, Modi and Macron represent the strongest redeemers of the world’s most formidable challenges of today- Climate change, terrorism and inequality. And no one knows more than these two leaders that combating these three enemies would require tremendous political will and resources. That is because confronting them is not an exercise of three separate encounters on three fronts.They are interlinked and complex clusters. Climate change is turning to aggravate inequality that drives terrorism creating vicious spiral of storms.

The good news is that the two leaders are compatible to eachother and likeminded. Macron is great listener and keen to learn from elders, like Modi. And Modi is staunch believer that the young leaders like Macron would be the tomorrow’s stewards to steer the world in right direction in milieu of political quagmire. Modi is innovative and Macron is inventive.

That combination of attributes of these two leaders is giving shape to one of the path-breaking projects that has emerged form Modi’s brave innovative initiative- International Solar Alliance.

Modi won the hearts of many heads of the states as well as politicians and business community when he disclosed his invention of ‘International Solar Alliance-ISA’ of the 121 countries that lie fully or partially in between Tropic of Cancer and Tropic of Capricorn. Macron, naturally inclined to inventive initiatives, not only supported it but agreed to be co-chair of this intergovernmental treaty-based organization earlier partnered with his predecessor Francoise Hollande in 2016.

With targeted 1,000 GW of solar installations globally by 2030 with proposed funds of US $1 trillion, the basic concept of alliance is to pool together international collaboration for research, technology, best practices and standards on solar energy including improving solar cell efficiency, material research and policies. ISA has entered into force on December 6th, 2017, after 15 countries officially ratified it. Number of countries participating is steadily growing. ISA heralds a new era of partnerships and collective actions to combat effects of climate change , reduce dependence of the fossil fuels and
reduce air pollution.

The region between two Tropics is really the ‘sun-shine belt’ around the Earth. The countries in this tropical belt receive the most solar energy among the 196 countries in the world. Modi has scored over a strategic and diplomatic tactic of President Xi of China who has almost concurrently flagged OBOR-One Belt One Road initiative. ISA, a real belt of 121 countries stands-out in comparison of OBOR initiative (now renamed as Belt and Road Initiative -BRI) on two counts. F irstly, BRI is aimed at enhancing the connectivity to take quantum jump in trade, mainly between China and other 68 countries without specific acknowledgement of the environmental impacts of such jump. ISA is the master piece of environmental project that aims at sustainable development of 121 countries in the tropical belt. BRI, is viewed by many as project led by one country with its hidden interest. ISA is bilateral initiative of India and France that has now transformed into intergovernmental treaty with voting mandates, leveraging the principles of United Nations. Clearly it is wider and honest efforts towards sustainable development.

Indeed Nature plays a role of great balancer. Rich countries, mainly outside the belt of two tropics, are replete with finance and weapon power , whereas ISA-countries are endowed with bright sun-light. The economic revolution in oil-rich countries in 70’s is likely to repeat in sun-rich countries , this time without any climate change impact. In fact ISA would be the correction factor to the climatic damage done by OPEC countries .

Any country in the world , even outside the tropical belt can join ISA, except that those lying outside the Tropics of Cancer and Capricorn would not have voting rights. Thus France and recently joined Australia would not be voting. It is great experiment of the real multilateral treaty resulting from bilateral ingenuity.

The timing of the official launch of the initiative cannot be better. The prices of the electricity from solar energy are reaching parity with the electricity produced by fossil fuel. The latest report from International Energy Agency ( IEAS) show that the global investments made in the renewable energy over last 3 years is more than investment made in fossil fuel. The employment generated in the renewable energy sectors is more than in fossil fuels. Some experts say that increasing and intensifying trade wars and anti-dumping appeals on solar panels around the world are signs that trade in solar panels is ‘pole vaulting’.

The time for Modi-Macron mega moment has arrived.

The impending risk, however, that is likely overshadow this aspiring global initiative due to the unrelated political debate and deals on military cannot be overruled. Numbers like three additional Scorpene submarines and thirty six Rafale-fighters are likely to take over the well-meant number in gigawatts and well intentioned timely initiative, particularly in India’s argumentative and democratic media.

Yet another risk is the usual pitfalls of intergovernmental process well known in the arena of United Nations. Each of the 121 countries has one vote but also stand-alone opinion. That may delay the decisions on joint research on solar cell efficiencies and storage technologies as well as allotment of funding for various projects.

The key to success however is Linking ISA to common man at the bottom of the pyramid. What is more relevant for India is not to push ISA to meet its own pledges for Paris Climate agreement or its own renewable energy targets of 175 GW but to anchor its efforts to mainstream solar and wind energy into all strata of the societies. Emphasize on using solar power not only in building sector but also in sectors that are socially important like agriculture, health, SMEs, IT industry and universitt only targets the funding and gigawatt targets but takes the targets to rural area through solar vaccine coolers, solar vegetable cold storages, solar schools and solar colleges. India and France should also set up an example by encouraging solar cell and panel manufacturing in Tropic-Belt countries and supporting the fair and just practices in trade in products related to solar energy.

It will not be exaggeration to state that ISA , if it works smoothly and show promise, can be well deserving candidate for the Nobel Peace Prize. END

Foreign Aid, No! But what about foreign lessons? October 7, 2018